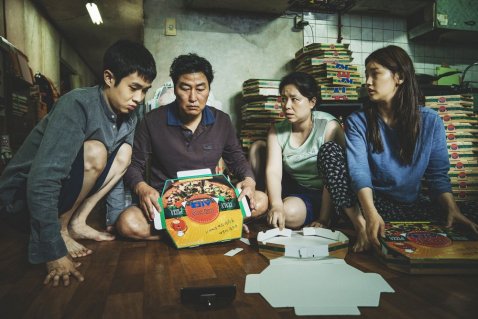 Director and co-writer Bong Joon Ho’s Korean comedy sees the unemployed Kim family fleecing the wealthy Park family for all they can get. It starts off with son Ki-woo (Choi Woo-shik) getting a gig as an English teacher to the Park’s daughter Da-hye (the cute Jung Ziso). Then in turn he recommends his sister (although their relationship is unknown to the Parks) as an art therapist, seeing Park So-dam as the crafty Ki-jung. She has to take on the Park’s spoiled brat of a son Da-song (Jung Hyeon-jun) who has an American Indian obsession.

As if that were not enough of a con they then get mum and dad ( Chang Hyae-jin as Chung-sook and Song Kang-ho as Kitaek) as housekeeper and chauffeur. So Mr and Mrs Park (Lee Sun-kyun and Cho Yo-jeong) are duped into having the entire family on the payroll. The deception seems to have worked until the former housekeeper returns. Then below the post-modern architecture of the Parks’ lovely house it turns out there is a hidden basement. In there is a secret as dark and dank as the space itself.

So while the first half of the film develops characters we care about (rooting for the underdog Kims) the second really turns up the pace. It develops the narrative into a daring denouement which escalates wildly. No spoilers here but suffice to say there is some ultra-violence at the Parks’ garden fete. This is a carefully constructed and very satisfying film which mixes wit and humour with an examination of class division.

Reviewed by Rich Jevons. Showing at Hyde Park Picture House, Leeds until 20 February 2020 and Pictureville Cinema, Bradford 21 to 27 February. See imdb.com for showtimes near you.

Rich Jevons is a freelance journalist based in Leeds. Just a quick intro: thirty years' journalistic experience (I was published in the Yorkshire Post at the tender age of fifteen!); a decade as Arts Editor at Leeds Guide; freelancer including work for Big Issue in the North, Metro Newspaper, Artscene, Northern Exposure, AN, AJ, BJP, Hotshoe International, National Drama, Plays International... And edited www.digyorkshire.com until its demise at the end of 2013. Now writing predominantly for www.thestage.co.uk, www.northernsoul.me.uk, www.thepublicreviews.com, www.culturevulture.co.uk and www.thestateofthearts.co.uk.
View all posts by richjevons23 »
« Previous post
Next post »